The Results Are In - DISNEY Reporter

More From Florida and Beyond! - DISNEY Reporter

More From Florida and Beyond! - DISNEY Reporter

Reopening Has a Plan - DISNEY Reporter

Reopening Has a Plan - DISNEY Reporter 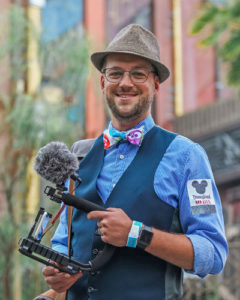 Mr. DAPs, the DISNEY Reporter, has been reporting Disney news since 2004 when he founded DAPS MAGIC. Through the years he has covered multiple events through the Walt Disney Company at Disney Theme Parks, interviews, movie reviews, theatrical openings, and more. On top of being the DISNEY Reporter, he hosts GEEKS CORNER. This is a weekly webshow that discusses various topics from the Disney and geek universes. Mr. DAPs, and DAPS MAGIC, covers news from anywhere in The Walt Disney Company and a few places beyond. This includes Disney Theme Parks around the globe, Disney movies, Lucasfilm, Pixar, Marvel, Knott’s Berry Farm, Star Trek, and beyond! You can find Mr. DAPs on YouTube, Facebook, Instagram, and Twitter.

This morning Imagineer Zach Riddley gave a first look at the found pylons for the entrance of EPCOT that were just installed. In a post on Instagram, Riddley said, “I’m excited to share a first […]